My most awesome writerly friend Madhuri Blaylock  of the amazing Sanctum Series has done it again. Feast your eyes on the cover of Dutch, the first in her Keeper Series.

Arrogant, handsome, and detached, deadly assassin Dutch Mathew has an insatiable appetite for bourbon, cigarettes, and women. A Keeper for The Gate, the shadowy organization designed to control Death and her Poochas, those reclaimers helping the dead cross back to life, he has three simple rules for anyone sharing his bed: no talking, no kissing, no touching.

And as one of Death’s Poochas, the best in fact, she is Dutch’s next assignment. He is tasked with ending each and every one of her nine lives but with her sharp banter, beautiful smile, and hips made for all kinds of wickedness, she isn’t going to make that easy.

Set in New York City and Trivandrum, Dutch, The Keeper Series Book One, is a unique and sexy urban fairytale – a must read for anyone who likes their raunch with a twist of romance and a hint of magic.

Watch for it to hit shelves 12th October 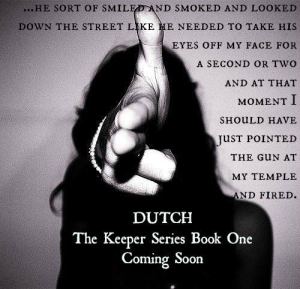 Madhuri is that Indian girl everyone thinks is Black, or Spanish, or Black and Spanish. She’s from down South, has lived in the New York City area for more than twenty years, and is proof that you can take the girl out of the South, but you can’t take the South out of the girl.

She is an introvert who can fool people into thinking she’s an extrovert, all the while wishing she was home alone, not having to speak to a soul, lost in a fantastical world of her own creation.

As the great Charles Bukowski said, she writes because it comes bursting out of her. She cannot stop it, nor does she want to.

She does other things to pay the bills.

Sabina Khan is the author of THE LOVE & LIES OF RUKHSANA ALI (Spring 2019/Scholastic) . She is an educational consultant and a karaoke enthusiast. After living in Germany, Bangladesh, Macao, Illinois and Texas, she has finally settled down in beautiful British Columbia, Canada, with her husband, two daughters and the world's best puppy. View all posts by sabina khan